Did some more testing.
Looks like my cold control pressure is way too high
also looks like my fuel pump is on the way out as it gets very noisy after a while. Will replace that first. 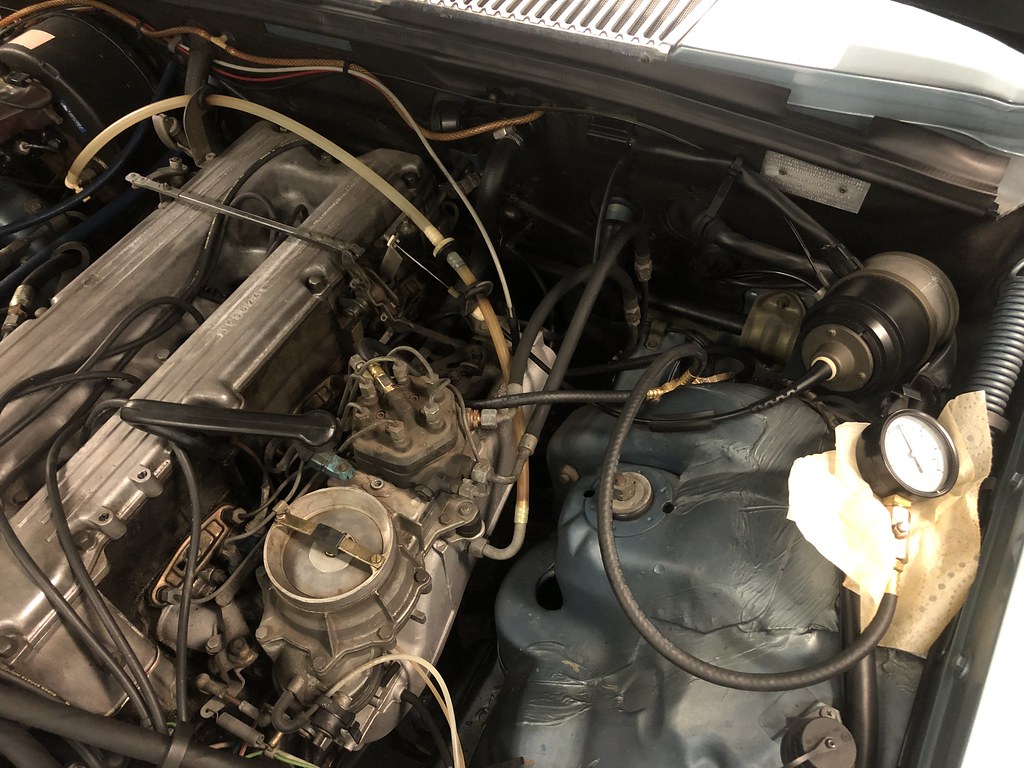 Part 2 of the K-Jet fuel pressure test on my 1979 280SE. Looks like my control pressure readings are too high, and my fuel pump is dying.

Last night I swapped the fuel pump over from my 420SEL parts car. The pump on the 420 were supposed to be near new. Will now need to retest but need a dead cold engine for that. 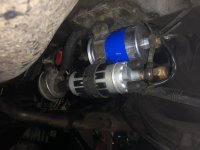 Why do you need a cold engine?
Michel

I'm testing cold control pressure as my theory is my warm up regulator is the culprit.
engine has to be totally cold, and warm up regulator power disconnected to watch the readings change first when engine is cold and then as it heats up.
Bryce
https://www.classicjalopy.com
OP

As an update on the 280SE, I’ve made good progress and it’s first outing may end up being the MBCNSW 50 year anniversary of the S class event. The w116 waa the first official S class so it would be good to bring the car to that event.

It’s now riunning pretty well. Having the WUR cleaned seemed to have made a big difference. 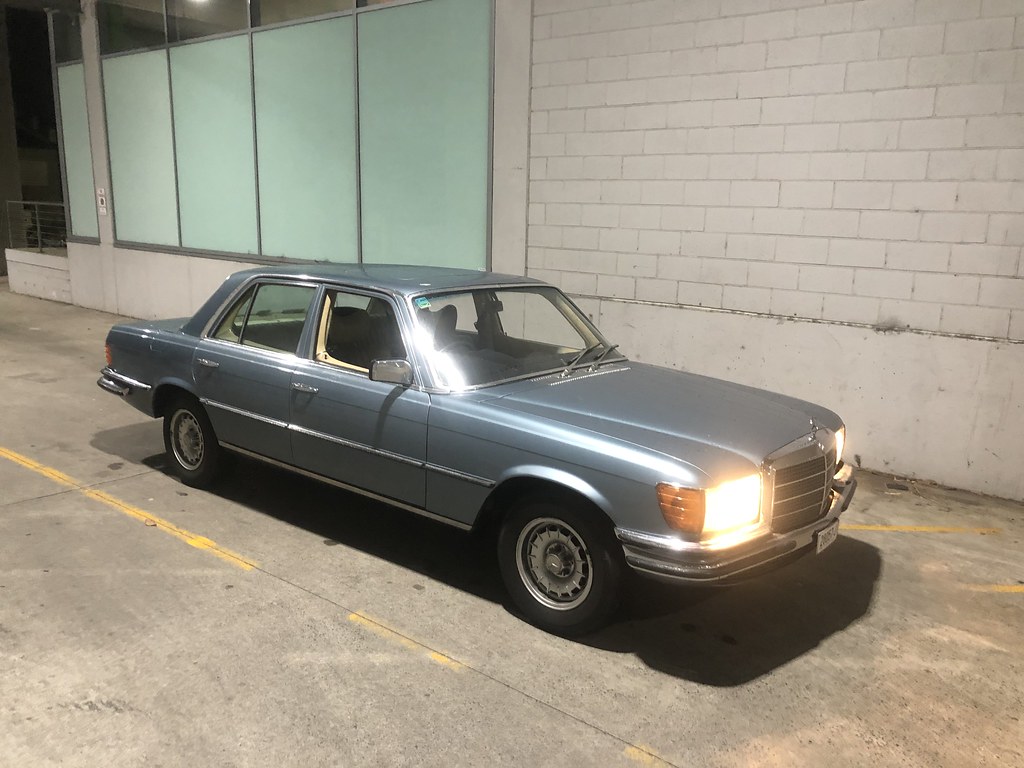 Part four of a series to get my 1979 Mercedes 280SE running properly. Here I am doing final control pressure tests.

I still have an issue at below 1/3 of a tank, looks like there is some debris blocking the little hole in the swirl pot but I can live with that for now.

Isle is a bit high - I think I have a vac leak somewhere as the idle screw is right down. I can live with it for now.

I did some temporary repairs on the exhaust system last night. Good enough that it doesn’t sound like a crop duster anymore. While I was in the USA I had the steering coupling changed.

I’ve also removed the broken aftermarket antenna. I’ve mounted a new one but not wired it up yet. At least it looks neat now. 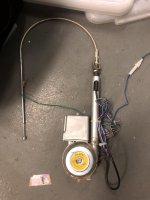 Next I have been cleaning the carpets. Carpets were in good shape but a little dirty. Doesn’t look like much improvement from the photos but they are better.
Before: 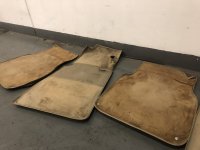 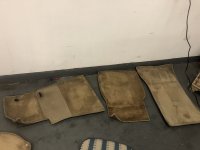 The car also had floor mats from another car that didn’t fit. I had some mats from my 560SEC that are a little worn but the right colour. Since the w126 is basically a second generation w116 I hope they fit. I gave them a good clean too. Certainly a lot of dirty water came out. 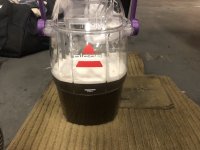 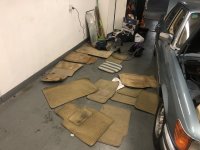 On Saturday I need to give the car a good wash, install the mats, check tyre pressure put in a full tank of petrol and take it for a test drive.

Gee, I don’t know who had the dirtiest water in their vac, you or Brian?
B

As well as the baby Bissell that Bryce also has, I also have one of these which does extract a lot more; 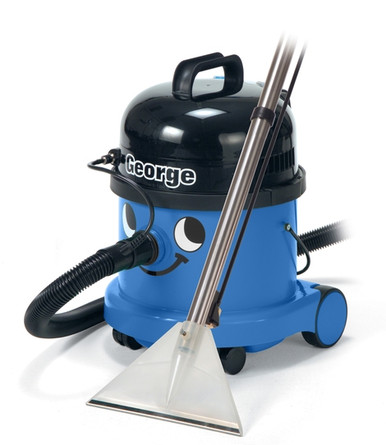 It is a commercial vacuum cleaner but also very popular in households, with limited space. Ideal for places where 3 different products are not needed. All 3 jobs can be done with only one cleaner!

On the way to the s class event in the 280SE, it’s first outing and only the 3rd time I’ve driven it on the street.

Last night I wired up the antenna, reinstalled the carpets and floor mats, checked tyre pressures, changed all fuses, washed the car, refueld and took it on an extended test drive. Seems ready for the event. 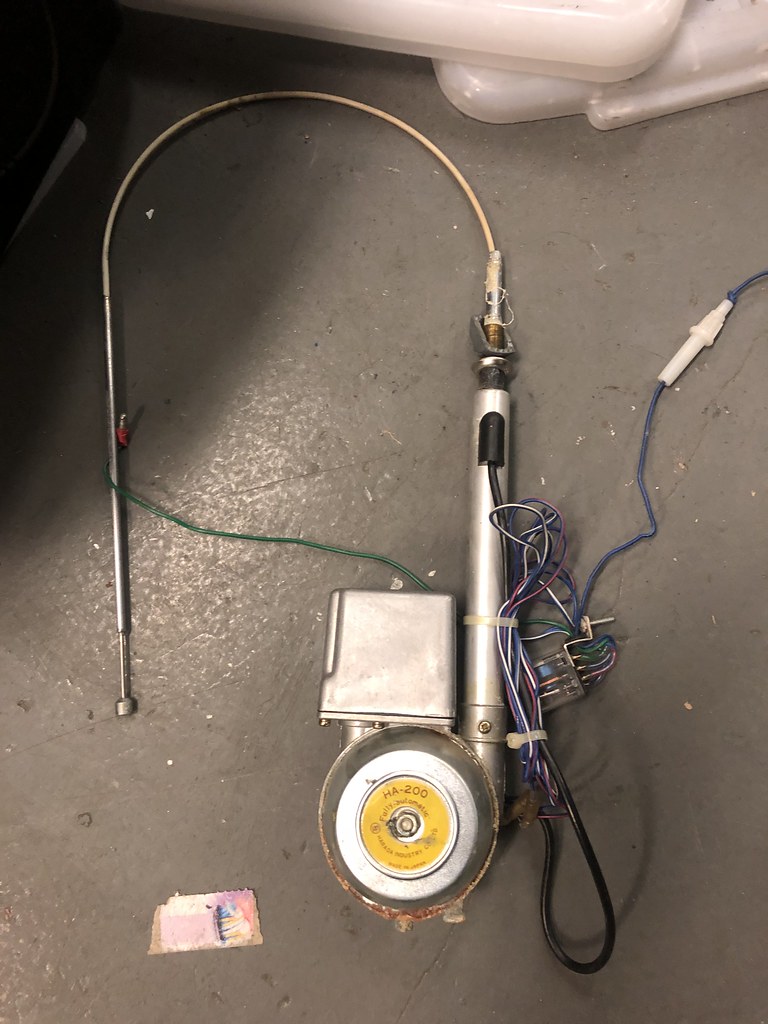 Preparing my 280SE for the MBCNSW S-Class display « Classic Jalopy 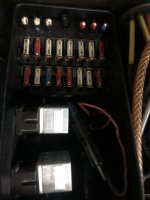 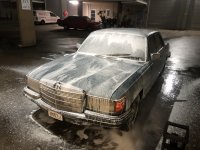 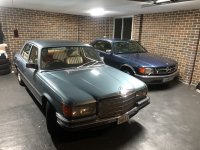 Obviously you would have seen the 280SE made it to the show. The engine ran well and the idle actually settled down to where it should after more driving.

I'm not going to drive it far until I fix the tie rod end and drag link. Will also check steering shock and idler arm while I'm at it. I got some quite bad vibration through the steering column at various speeds due to these parts being worn.

Then there is of course the exhaust.

Other things I noticed was that the sunroof is slow and a bit unwilling to open and the rear drivers side window does not work. Speedo is also quite optimistic, like most old benzes.

Original becker works but the on/off doesn't seem to and since I can't turn it off, I can't lower the (new) antenna and park it under the hoist.
Bryce
https://www.classicjalopy.com
OP

Did the drag link, idler arm and all four tie rod ends.
Idler arm looked a bit old and sorry, glad i did it, it was pretty bad when it came out.
Only one tie rod really needed doing, but its not that big a deal to do both sides while I am there, and since I have to pay for an alignment, rather do that once.

Helps to have the right tool. trying to do this without the ball joint separator is a huge pain and it wasn't even very expensive. Bought it a few years ago when I was helping my brother do the 280CE tie rod ends that failed his rego. 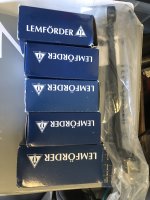 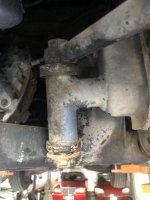 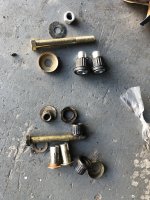 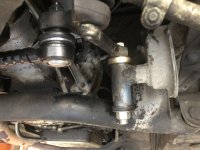 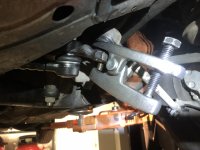 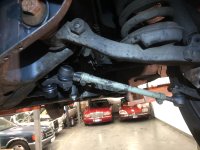 the 280SE had a wheel alignment done after I did all that work on the tie rods and is now at a muffler shop to have the rotten exhaust system fixed.
Bryce
https://www.classicjalopy.com
OP

The 280SE moves from being a garage queen to a rolling restoration now.
Exhaust is fixed and it drives reasonably well once warmed up.
Next couple of things include fixing the drivers seat and replacing the thermostat so it can warm up faster. 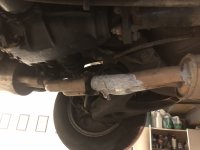 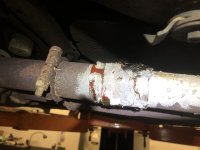 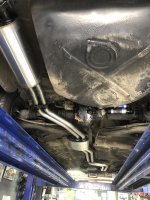 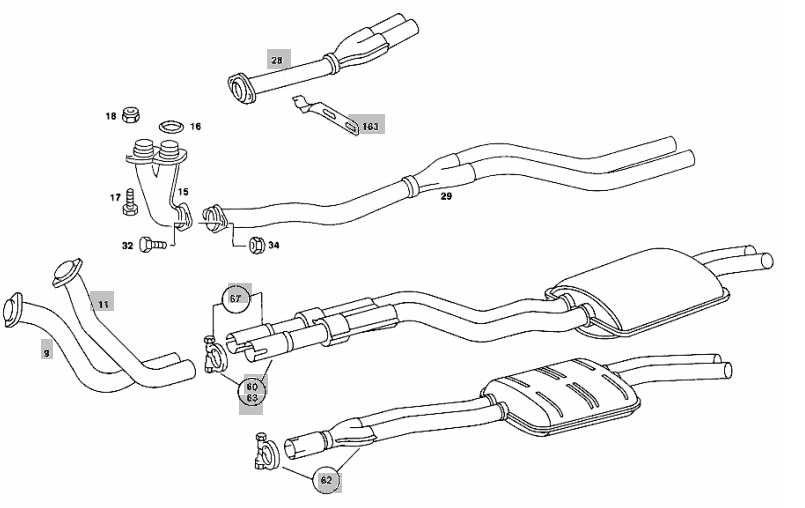 Why the right hand drive 280SE W116 exhaust is a poor design and what I replaced it with. Removal of the Y-Piece.

That is a neat job. I see you went to Hi Tech in Darlinghurst - they have been my go-to exhaust people for 30 years and they have always done a great job.
Regards,
Brian
Real men drive a 6 speed manual.
OP

BenzBoy said:
That is a neat job. I see you went to Hi Tech in Darloinghurst - they have been my go-to exhaust people for 30 years and they have always done a great job.
Regards,
Brian
Click to expand...

Yes, they have done four systems for me and always looked after me and done a great job.
A bit out of my way, but worth it for the result.
Bryce
https://www.classicjalopy.com

Why the right hand drive 280SE W116 exhaust is a poor design and what I replaced it with. Removal of the Y-Piece.

Bryce, can you share what the cost of that exhaust was?
Michel 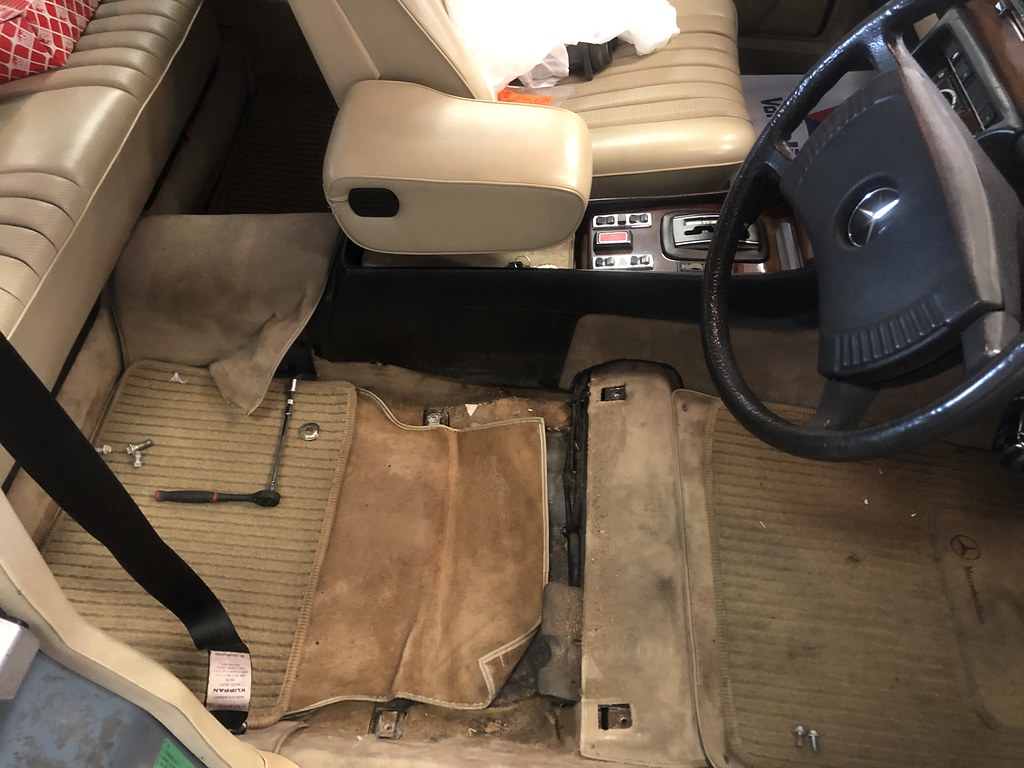 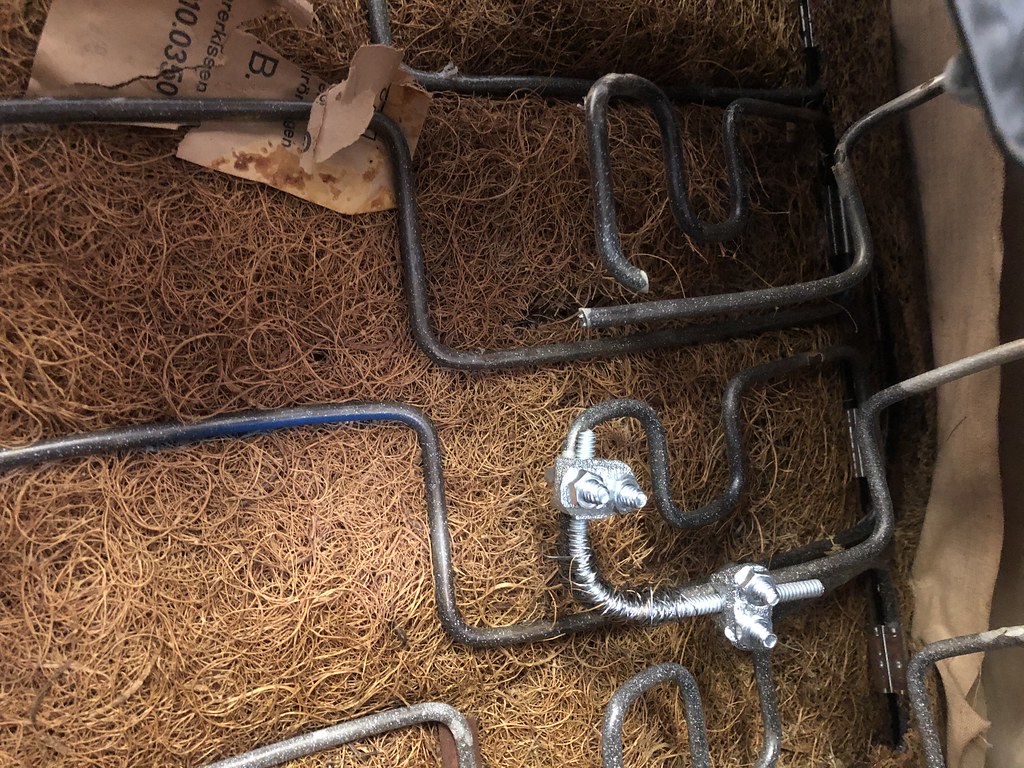 Great documentation on your website!
You’re certainly a man of many talents

after successfully getting the car back on the road I have suffered a setback.
I went to take the kids to a playground in the 280SE this morning, but the ignition key would not turn in the lock. After 20 mins of trying, we gave up and took my wife's modern car.

This afternoon i've been trying to get the lock to turn, so I could replace the tumbler. I've tried all the things on the various kent bergsma videos to no avail. after two hours of trying, I can't get the key to move to position one.

It's currently blocking my other car, so I'll have to go and get some jacks and try and push it out of the way.

If I can't get the key to move, I can't replace the tumbler and I'm stuck.
Bryce
https://www.classicjalopy.com
B 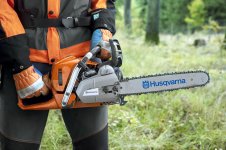 Real men drive a 6 speed manual.
You must log in or register to reply here.
Similar threads