... or lack thereof!!! By request an update on my cars and circumstances. As some of you may be aware, I've recently split with the girlfriend and unfortunately it's meant we'll have to put the house on the market. I simply cannot afford to buy her out. And it's such a shame because this place is in a beautiful part of the world and we're surrounded by wildlife. Just the other day I was confronted by a big grey kangaroo not 15m from the house! It has a double garage and a barn. The barn is high enough for a hoist, so it would've been perfect... The property is on 10 acres and has been a lot of work, as it was in a state of disrepair when we bought it. The property's in the North Western outskirts of Melbourne, up in the hills and about a 45min drive to the CBD. Here winter lasts about 5 months!! There's a slow combustion heater as the primary source of heat, plus an open fire and a backup reverse cycle airconditioner. As anyone that's had wood heaters before would know, they're messy, expensive to run and time consuming. Perhaps this is all a blessing in disguise, as it seems my work is changing location to the Eastern suburbs in early October! And I didn't really need 10 acres anyway.... I'll probably post some pics of this place just before we move out. So this has all taken me away from what I wanted to achieve, which was focus on my cars. Here's where they stand at the moment:

6301: MB3 - Euro. Previously owned by Blackhands from WA. Sounds fantastic, but too loud for rego. Currently on LPG, but hard to start and doesn't want to idle. I replaced the aircleaner and crankcase filter a while ago. Gave the engine a good steam clean on the way here. The battery's currently flat and I've been charging it up over the last few days. The aftermarket steering wheel looks good, but blocks the speedo. The speedo's from a regular 450 and I intend to fix that soon (I have no idea how many kms she's done). I'd like to reroute the gas lines in the boot to tidy things up. Bought some inertia reel seatbelts for the rear a while ago (these were deleted from the options list). Some minor rust to repair in the nearside rear mudguard. Still looks good, the suspension works well and I love the wheels!! I'll have to replace the LPG mixer as I believe perished diaphrams are the cause of the idle/start problems. I have something special planned there, so I'll keep that under wraps until the M100 tour!!! Not far off full rego.

5541: MB4 - The Red Rocket from QLD. The front suspension leaks from one of the hoses, so I have to fix that. She didn't perform well when I drove her here, in fact she felt downright dangerous! I suspect she's in dire need of a tune, service and maybe a timing chain. I also suspect there's issues with the engine, or subframe mounts. Needs new suspension accumulators. There's been some strange repairs done to the driver's floor which I have to investigate and there's some rust in the bottom of the doors. The steering wheel pads come off and the window switches need to be replaced. Not sure if I like the wheels in body colour, but it's popular with the ladies! Recently steam cleaned.

5298: MB2 - From North Melbourne. More significant rust in the lower rear quarters. Small rust pin hole in the roof near one of the gutters and some rust in one of the sills. Needs a total respray. Rats had a chew on a wiring loom, but it still runs..... poorly. Really hoping it hasn't burnt a valve, or chewed a cam. It does run silently though and the suspension doesn't drop, even after weeks (probably due to the rechargable accumulators). Have to check the timing chain. Carpets need to be replaced. Brakes are scarey so they'll need attention. Steam cleaned recently which made a huge improvement, as she was pretty sad when purchased!

4248: MB1 - From St Kilda. Thought of as a parts car, but I'm currently reconsidering options. Had significant water damage to all the carpets. Needs new leather and a total respray. Rust in the firewall and at least one sill (under the plastic cover). Bad rust in the sunroof frame. Floorpan damaged by some idiot with a trolley jack. Strangely runs the best, but has a significant leak from the front valve and leaks from the rear one as well as the power steering box. Small rust spots throughout the boot and lid. Needs new accumulators.

So what's common to all? Bloody sunroof leaks!!! I'll be pulling out every one to ensure this doesn't happen ever again, or ruin anything I intend to replace! So yeah I'm pretty bored, with nothing much to do!
Last edited: Aug 10, 2011
Mark

Sorry to hear of your situation mate, Keep solicitors out of it and a clean start will see you with more sheds, more cars and more fun.

Have you thought about patching this up with the Girlfriend.

It'll be much cheaper than repairing all the 6.9s.

Good luck mate and be assured the whole of Topklasse is right here with you!
Last edited: Aug 12, 2011
Michel

My HEART WITH YOU MARK , i know such moments are sad in that time , but time is healer and courage my friend .

I just dug this out - for no specific reason. Sad to see Tarek as the last poster to this thread. In the meantime, Mark is battling on - I am sure. Regards. Styria
OP

Here's progress.... Only 7 more to go from my current place. Then there's the other place! 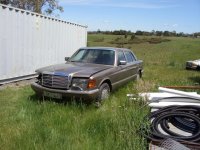 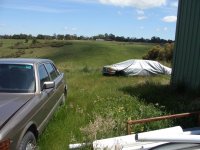 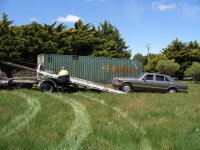 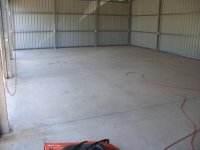 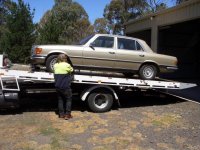 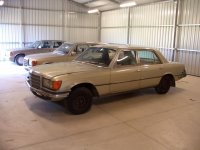 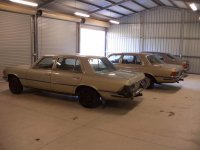 What are your plans with the three Mercedes Mark?

The cars going into the main shed are parts cars and will b rapidly stripped to make way for the better ones. At least that's the idea....
Mark

Sadly I'd agree that it's likely my whole w126 collection will end up as parts. Most are far beyond saving through crash damage, non-compliant private imports, PO abuse & a complete lack of records or history....
Mark

I'm toying with a few ideas but I don't wanna take on another massive project.... I'll be taking off the parts I need and then most of the W126 fleet will be sold as parts and the bodies scrapped
Mark

Mark will you be selling any of your W126 parts if so which parts will you have for sale?
OP

The main things I need from the W126s are brakes, rear axles, sunroofs and seats. Everything else will be sold or scrapped so keep and eye on Gumtree and Ebay for my listings after Christmas
Mark

Oversize said:
The main things I need from the W126s are brakes, rear axles, sunroofs and seats. Everything else will be sold or scrapped so keep and eye on Gumtree and Ebay for my listings after Christmas
Click to expand...


Okay thanks for letting me know Mark.
You must log in or register to reply here.
Similar threads