It's almost two years to the day since I got back my '78 6.9 from the repair shop where I had all five spheres replaced. This afternoon while driving home from work, the bounce has returned signaling the demise of one or more of those spheres. Bouncy bouncy is how I would best describe the ride home. Taking a poll of the reading audience: How long have you been able to run before having to replace these spheres? And what diagnostic steps should my repair guy take to diagnose which one or ones have gone bad? The last time this happened, it cost me over $2K in parts and labor to replace them. Not happy.
MercedesMike
Chicago Suburb
1978 6.9
Black on black
J

Wow, 2 years is a very short time for a sphere to last, hopefully it is only one sphere that needs replacing.

I had spheres in my 450SEL for 5 years before it was hail damaged and sold, the previous spheres were 5+ years old, probably nearer 10 I should think.

I stand to be corrected, but I think that there 3 manufacturers of spheres for 6.9's. I do not know if there are any differences in quality between the manufacturers. Fichtel & Sachs are one of the manufacturers, but they are not the ones in my car.

Im getting conflicting reports on what signals a buggered sphere.

Im also told that they had a filter fitted later on to the low pressure return.

From what I understand the first sign of trouble is uncontrolled movement in the suspension; not sure exactly why. When they've completely failed it'll go rock hard. When the diaphram fails and the nitrogen leaks out, there's nothing but fluid in the cell and a fluid cannot be compressed.
I'd suggest bouncing the car when stationary by pushing down on each corner to try and isolate the failed cell. I'd replace them in pairs (across an axle), like any standard shock absorber so you don't upset the balance of the car. I'd also check the warranty, but it probably expired after only 12 months.
Last edited: Oct 12, 2010
Mark

That makes sense, I voiced those same thoughts elsewhere and was told that noooo they had to be soft bouncy when they failed.

Hi MercedesMike and others - it is somewhat unusual for the Air Cells to only last for two years. Like with a number of 6.9 components, the supply of 6.9 parts exclusive has been swallowed up by items that used to be later models exclusives, such as Air Cells which are now marketed for both the 560 and 6.9 alongside.

In the olden days, and I am talking of fifteen years ago, a 6.9 Air Cell would in fact provide you with a service life of no less than ten years. Alas, those halcyon days are gone. In my experience, a new 'after-market' Air cell should last about four to five years. For the Australian market, you are normally supplied with units made by Febi-Bilstein, but I understand that Meyles were available probably three to four years ago, and another brand is Lemfoerder. I believe the last named to be the best, but also the most expensive. I do not know who makes the units for MB themselves. Meyle are the least likely to last well.

If an Air Cell has collapsed, that usually, in fact will always, result in a very bouncy, and downright uncomfortable ride. In fact, the ride can become so rigid as to result in the vehicle becoming undriveable and downright dangerous.

A well set up 6.9 should provide you with soft, and floating movement, when placing your weight on the front or rear bumper bars. It should rock like a waterbed. Regards Styria
Last edited: Jun 10, 2011

A few other cars that have hydraulic suspension a la 6.9:

Citroens. I can't identify the models, but certainly the SM did,

It was an option on the Mitsubishi Verada,

Perhaps other Topklassers can identify other makes / models.

Im actually wondering if they fitted incorrect SLS Spheres to your S class?

Perhaps the W124 Spheres are smaller?

Others with hydraulic syspension that I know of include:
MB W116, W126
Citroen DS & many that followed
Lexus LX470 (some features developed in Aus)
Morris (not sure which ones)
RR
Berliet (truck)
Arjun (tank)

Why is it that the suspension becomes incredibly bouncy before it goes rock hard?
Mark

Oversize said:
Others with hydraulic syspension that I know of include:
MB W116, W126
Citroen DS & many that followed
Lexus LX470 (some features developed in Aus)
Morris (not sure which ones)
RR
Berliet (truck)
Arjun (tank)

Why is it that the suspension becomes incredibly bouncy before it goes rock hard?
Click to expand...

Mark, it is because with more and more oil in the air cell, and less and less nitrogen available to stop compression, as someone has said fluids cannot be depressed. It's like driving a cart - no springing, incredibly bouncy. To check which one is faulty, drive ONE side of the car only over a speed hump, and then repeat process for the other side. You'll soon know which one is in need of replacement. Regards Styria
J

When the sphere initially fails, nitrogen leaks out and mixes with the oil. This 'aerated' mix cannot be controlled by the shock absorbing valves so you then get a soft bouncy ride. However, once the nitrogen has been depleted and only oil is left in the system you get the rock hard ride.

On 116's used daily you will notice the bouncy ride when it occurs, However on a club car that may only be used once a month, or perhaps go 2 months between used the car can go from a normal ride to rock hard as the nitrogen has had time to leak out. You may notice that the back or front is down a bit and the reservoir needs filling once the car pumps itself up, the extra oil replacing the lost nitrogen in one or more spheres.
OP

It turned out the failure was with the two rear spheres. They were replaced and now the suspension behaves normally. Only $950 USD since my mechanic didn't have to replace the front ones. Sigh. An expensive hobby.
MercedesMike
Chicago Suburb
1978 6.9
Black on black
J

My initial impression was "Wow, $950 is a lot of money" as I paid about $500 when mine were replaced - but then I realised it's probably 10 years since they were replaced, so perhaps the increase is not as bad as it looks!
Last edited: Nov 1, 2010

John S said:
My initial impression was "Wow, $950 is a lot of money" as I paid about $500 when mine were replaced - but then I realised it's probably 10 years since they wete replaced, so perhaps the increase is not as bad as it looks!
Click to expand...

Well, no JohnS, that price MercedesMike has been charged is quite high by Yankee standards. Also remember, that the rear cells for a 450 or 280 are smaller than those on a 6.9 and also quite a bit cheaper to buy. Regards Styria

My understanding reading M-B literature is that there are three spheres for this era of car.

2) next pressure up is used as rear spheres on 6.9 and front and rear on 126 with full hydraulic suspension.

3) Highest pressure is the red dot spheres used for the front three spheres on a 6.9.

As far as I know they are all identical externally except for the colour of the splash of paint on the rear of the sphere.

As the red dot spheres seem to be getting harder to find people may be tempted to use the rears on the front or even SLS spheres on teh back of a full hydraulic with problems presumably developing.

I have found this old picture from three years ago which show the three different spheres on my 6.9.

The OEM red spot sphere is in the central sphere position - the rear has two Lemfoerder blue spots and the front has two red spot Febi's. 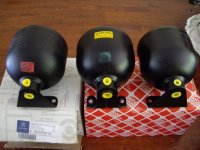 The left one is an OEM one with M-B markings and weighs 2.5 kg. It is physically a little larger than the other two.

The middle one is one I took from the rear and is identical to the Lemfoerder that replaced it so I would think it is a Lemfoerder - it is noticeably smaller in dimensions and has a cut-out bracket in lighter gauge steel and this particular sphere is probably a bit short on Nitrogen Gas - it weighs 1.5kg. It almost looks like new and could easily pass for a near new second hand sale but on the car it was SNAFU.

The one on the right is a Febi - it has no red marking but the box has the same part number as the OEM red spot one. It is superficially similar to the OEM one but is again slightly smaller than the OEM and weighs 2 Kg.

I guess we will see which brand fails first with the passing of time.

Hi Bill, you basically confirm my claims that "things are no longer what they used to be". I wonder if MB dealers themselves are selling 'genuine' 6.9 units, or whether they are in fact supplied by the same source as after market outlets.

I have in times gone by weighed the various units, and whilst I nowadays can no longer remember the exact details, there is no doubt that 6.9 units were a little heavier and possibly a little larger. I still have about twelve unuseable units that I have been saving with the possibility of getting them re-gassed, but as with so many things, I have not gotten around to trying to do something with them. Regards Styria

Through some old paperwork & some detective work, I managed to track down who I think was the second owner of MB2. Turns out he used to work in the hydraulics industry & is now semi-retired. When I first picked up the car, I noticed some unusual fittings attached to the hydraulic lines under the bonnet. I figured they were used for diagnostics of the suspension. Unfortunately one fitting was poorly placed right over the reservoir, so it's currently impossible to check the oil level easily. When asked about these fittings, it seems they're not the interesting part of the modifications.... Bearing in mind I haven't looked under the car, it seems all the spheres have been converted so they CAN BE RE-GASSED!!!! It involves tapping into the nitrogen side & attaching a fitting for re-gassing. Assuming the diaphram hasn't failed, this could extend the life of a sphere dramatically! I've yet to get more information & I'll follow-up with pics when I have the time. In the interim I'd suggest you don't throw out any old spheres, especially the heavy OEM ones..........
Mark