The AMG 6.8 litre Ch. 109 has been the subject of considerable discussion on TK. Of course, Tarek in Egypt, is working/ has been on a replica, and perhaps this video will get him out of his corner and tell us about progress, such as it may be, both on his RedPig prospect and the 116 he was restoring. We have not heard much about either of the two cars.

Sorry to say, but the video is in German, but still worthwhile looking at. I don't think we have shown it previously on TK. BTW, I am looking at the horsepower and torque figures - what surprises me is that any later day 6.9 project AMG were involved with could never get even close to those specifications. Regards Styria

N.B. BTW, does anyone know at what stage the stacked so called American headlights saw the light of day ? Put on your thinking cap. I found out the other day and I was flabbergasted.

I think you guys are spot on. I will, in due course, submit a picture I found "In Aller Welt" of a Saloon 220SE (I think it was a Saloon) delivered to the Emperor of Japan. As I said, I'll copy and paste in due course. Regards Styria

N.B. I must admit that I was very surprised when I spotted that picture.

Thank you very much for the video , first time i see this one but in german so i need to go home fo my wife to translate it for me , i also want to thank you to encourage me to finish my project which was stopped due to my health condition which was going down since beginning of 2013 when i was in the states but now you gave me reason to complete it .
you always be my mentor and keeps us enjoying our passionate love to our stern .
here is some data of my project till now ,i find big difference between the original rote sau and mine in
1- engine used in rote sau was 6800 ( even it is written in this replica 6.3)
but i use the m103 which is only 3000 cc cause when i started the project that was available then.
2- i used w108 chassis not w109
3- i used same seats not the AMG buckets seats used in the original version
4- i used black steering wheel of later models not the one used in video
5- no sticker used since not allowed to register with stickers
6- still put the bumpers for same reason traffic rules
7- i can't use same tires as in red pig though i put wide tires in back
8- i didn't use the original AMG wheels

hope that show how far my project is far from being a red pig ,very disappointing but that is the reason why i'm not eager to finish it

thanks MOTEC, you guys give me the reason to go on

Good to hear from you again Tarek.

All the best to you Tarek hope life is treating you well in Egypt?

Good to hear from you TAREK.

Is your health back to normal now?
Michel

Tarek, I read with interest the list of "problems" related to your Rote Sau effort and endeavours. I sort of get the impression that rteally you are, or have come , to a full stop and that it is all just a bit too much for you. I can understand why, having regard to the quite specialized nature of what is essentially an icon nowadays which has been reproduced by well skilled and well heeled enthusiasts in Germany.

Unfortunately, you have little hope to compete with those enthusiasts, and specialists that have all facilities by way of parts and labour and skill at their beckoning. However, it is fair to say that you cannot compete with those sources - wrong country, wrong everything, but that should not deter you from finishing your project(s). Who cares if it is a 108, who cares if the wheel is black instead of white - what you ought to achieve is a 108 that is mobile and can be used, that you can sit in, and have it the right colour. The engine does not matter in the overall scheme of things - just go with what you have, rather than having it sit in a corner of your garage or storage area collecting dust. How about it, Tarek ? Regards Styria (just my opinion and thoughts on your project).

Lol as usual you are one of my reasons to go on ,the project dropped for 2 years now and still want to finish ,I got the rubber for windows from the us but still stored ,the car still in the mechanic shop ,Ned to be cleaned and re prepared and yes full of dust and maybe the paint job need some finishing , my old son will come in first august from New York ,might try to make it ready for him before
Regards
Tarek

Sorry Michel didn't see part of your post but I am a bit normal ,meaning going to office and travel ,might go to shetura for my brother wedding by mid June lol but I am ok with failing eyesight ( annoying) but hamdolelah I an still alive
Miss you all
Regards
Tarek
P.s still hate Blu lol I need to change 3 items before I like it or to be like my w126
OP

WiSeGuYY said:
Lol as usual you are one of my reasons to go on ,the project dropped for 2 years now and still want to finish ,I got the rubber for windows from the us but still stored ,the car still in the mechanic shop ,Ned to be cleaned and re prepared and yes full of dust and maybe the paint job need some finishing , my old son will come in first august from New York ,might try to make it ready for him before
Regards
Tarek
Click to expand...

Hi Tarek, that's as good a date as any to aim for, isn't it ? I fully understand just how difficult it must be to devote not only your time and effort, but also the willpower to say to yourself "okay, this weekend, or the day after tomorrow", I am going to re-open that partially closed book. It might take a couple of hours to get started, but once you have put in a reasonable amount of time, say five hours, you could re-kindle your enthusiasm. Regards Styria

If you don't like it then sell it to someone who does! And don't worry about your 'replica' turning out a bit different! Every vehicle is unique, so try to focus on what will make you happy... Finish it a enjoy the experience
Mark

What we all seem to forget is that Egypt has been in turmoil for a few years, since the ousting of the former president Mubarak.
The country is still suffering unrest, and i would easily understand why TAREK would have also lost a bit of interest and simply reassessed the situation.
Not to mention TAREK's health scare...

Restoration and modification of cars is a hobby and when your homeland is in trouble, that becomes a very second distant priority to your safety, survival and the like for your family.

Be assured dear TAREK, I know what you have gone through.
Michel

and I hope you and your family are well now and into the future .
Research more post less.
Memnoch #1873 6.9 255.6 RWHP
The Kommando believed only 1 in Oz

Thank you Michel ,I couldn't describe it better myself but now we are much safer than before and Mark so a Geoff be sure I will go on with the projects.
So sorry Mark but the idea of selling it did cross my mind but I did invest plenty in it so far and the look is great but still I feel I need to get her a new automatic so as other parts to say it was a success.
Regards
Tarek

Well I thought I'd add my 2c to this old thread as we remember a fallen comrade. This is a section from my upcoming article in the MBCV ATB Magazine which is published monthly. During my research I discovered some interesting new info:

The vast majority of us would be familiar with the 300SEL 6.3 (which isn’t strictly a S-Class). The 6.9 used the more advanced second generation M100 engine and was a direct descendant of the 6.3, so I guess I’m sort of justified to make mention of the previous model in the S Class pages. The earlier 6.3 signaled the birth of the performance sedan for Mercedes. After the tragic LeMans crash of 1955, Mercedes withdrew from motorsport and there were few offerings from the company for individuals who were looking for a performance orientated vehicle. Certainly nothing that was practical for daily duties. For a couple of years after the disaster even sales of the 300SL were affected and production of that model ceased entirely in 1963.

It took the amazing work of just a few individuals and a couple of smaller companies to pressure Mercedes back into motor sport and to finally provide enthusiasts with a new ‘class’ of high performance sedans. Mercedes did build a prototype Pogoda and fitted it with a M100 (complete with bonnet bulge and stiffer springs), but after only 9 laps of Nürburgring, it completely shredded the tyres. Plans for that configuration were cancelled shortly thereafter. Erich Waxenberger kicked everything off in 1966 by shoehorning the M100 into the W109. On 18th May 1969 he raced one to victory in Macau after 6 grueling hours. The car was a dark colour and sported number 51 on the doors. On 26th July 1969 three cars arrived at Spa to be driven by Jacky Ickx and Hans Hermann (#4 - qualified 2nd), Rauno Aaltonen and Dieter Glemser (#5 - qualified 4th) and Kurt Ahrens and Erich Waxenberger (#7 - qualified 6th). All three cars had severe issues with tyres and did not start the race.

At Spa in 1971 Hans Werner Aufrecht and Erhard Melcher entered their red coloured AMG (#35 – qualified 5th) which achieved a historic 2nd place at the end of the 24 hour race. Dubbed the ‘Rote Sau’ due to its size, weight and colour, it was driven by Hans Heyer and Clemens Schickentanz. And so began the legend of AMG and a long racing partnership with Heyer. The interesting thing about the car was what they’d done under the bonnet. Along with the usual exhaust modifications, they’d created a custom intake, including twin throttle bodies and separate plenums for each cylinder head. 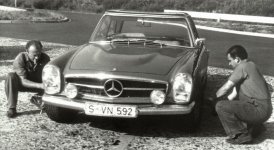 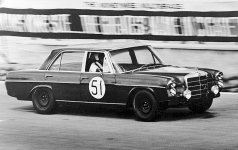 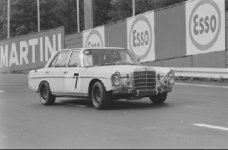 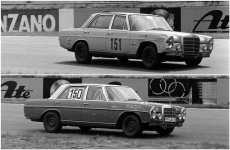 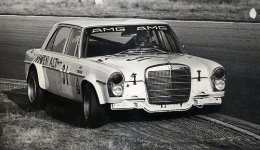 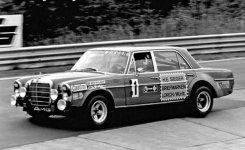 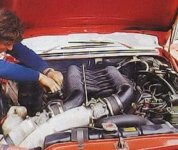 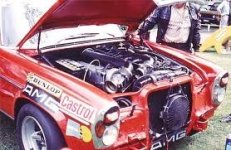 Fascinating research.
Thank you Marc for this amazing information!
Michel