I've been thinking about putting my 560SEC and 450SLC back to stock radios. Only issue is that they have become so expensive on ebay.
Anyone have a Mexico cassette in good cosmetic condition they would be willing to let go of for a reasonable price? I only need the head unit, the amp was still in the car. 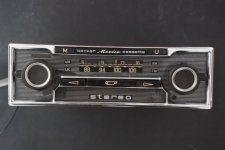 Would also be interested in finding a 1402 for the 560SEC for a reasonable price too. 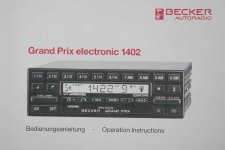 Was able to find what I needed, thanks to Styria.
Bryce
https://www.classicjalopy.com

I am really pleased that I have been able to supply with what you wanted. Regards Styria

N.B. It was also pleasing to see your W126 Coupe in such well cared for condition.
OP

Last night I went to testing the radios. I already knew the Mexico cassette would need repair, but the 1402 was last working in Styria's car some years ago, so it needed to be checked.

As the wiring in my car has been cut, I needed to buy the proper plugs, which have now arrived. I want to stream music through my phone, so I bought an FM injector, that goes into the antenna cable so you don't have to modify the original radio.

Using the original speakers from the 420sel parts car, I was able to get it all to work today. they sound terrible, but they have the right plugs. I won't be using these speakers for the real install obviously.

For the second generation W126, Mercedes offered a premium sound package. For some reason this was never supplied in Australia. It was however standard on the 560 for all second generation cars in the USA, and some of the other models in later years. Part of this package is a little box that plugs into the back of the radios and provides amp pre-outs. My next step is to try and get that working.

Of course, because its vintage becker, It runs proprietary plugs, but I should be able to wire them up to standard RCA connecters and then use a modern amp and speakers. I don't want to use the factory fader, nor do I want to use it as a two channel unit.

Ultimately this radio will go on my 560SEC. Unlike in Australia, where the CD player was standard on the 560 models, in the UK the radio was ordered like any other option and my car had this style of cassette deck when new. It was probably a 754 model, but the 1402 is a lot better and looks almost identical. the 1402 was standard in Australia for 88-90 models, not sure about 91.

I've got this all running from an old car battery and it works great. Listened to music for a couple of hours while I worked today to make sure there were no glitches from running the radio for a while. 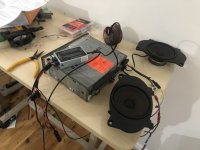 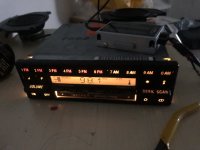 Excellent stuff. The Beckers really are a class above the rest and I know you will enjoy.
Regards,
Brian
Real men drive a 6 speed manual.

Terrific update Bryce, and a top job as well.
OP

Researching the correct Becker radio for my 1977 Mercedes 450SLC and 1987 Mercedes 560SEC, purchasing used radios and testing them.