More threads by B13

Here are some pictures I to today of SELfor50 racing 450SEL at Winton today: 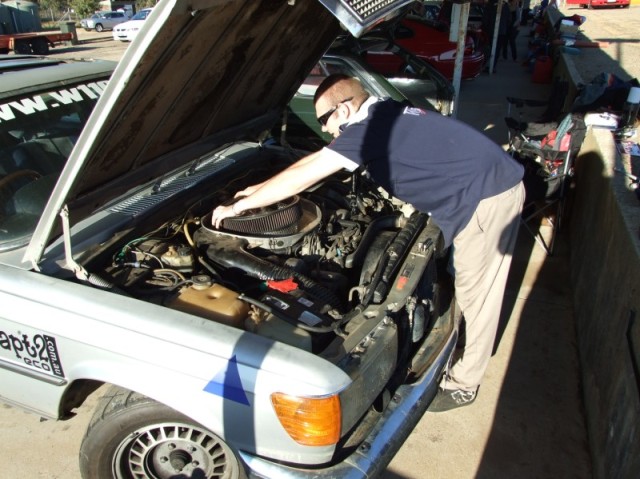 Scruitineering bay: yes they are Yokohama A032R tyres and parked next to Cam is a brick... Austin Cooper S 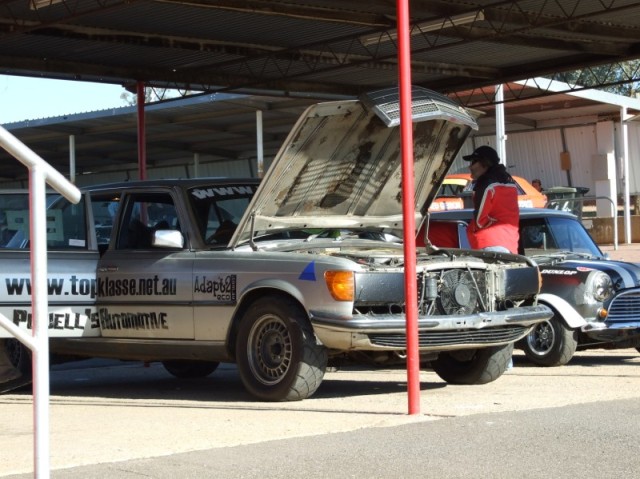 Smile on Cam's dial indicates all is good for the scrutineering - lets race! 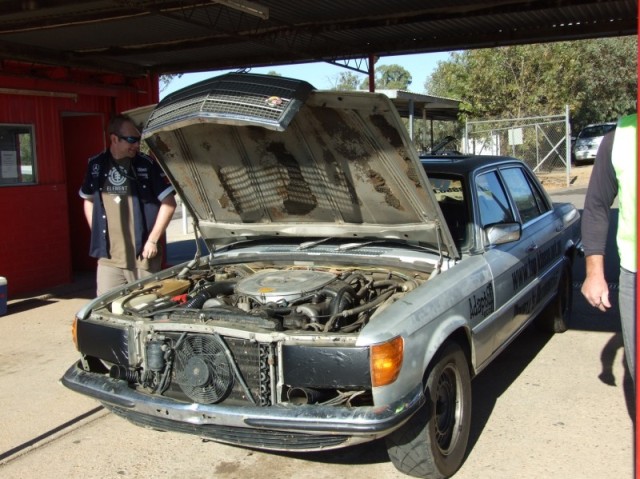 Gridded up and ready to go!! 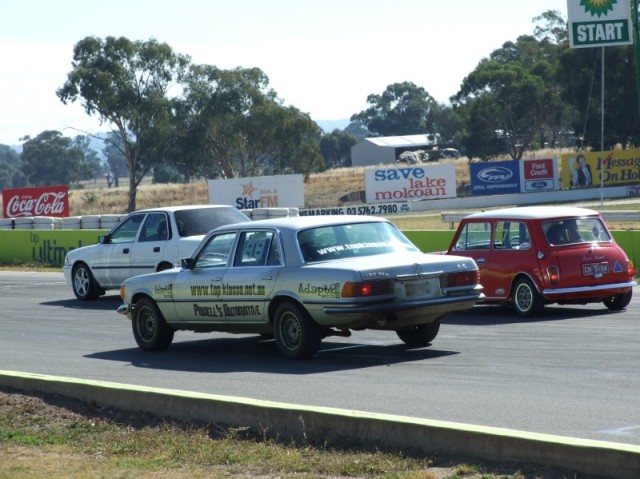 This isn't a great shot but I've put it because it shows an ex-Bathurst GTHO Phase 3, a HQ series racecar, and a Cam: 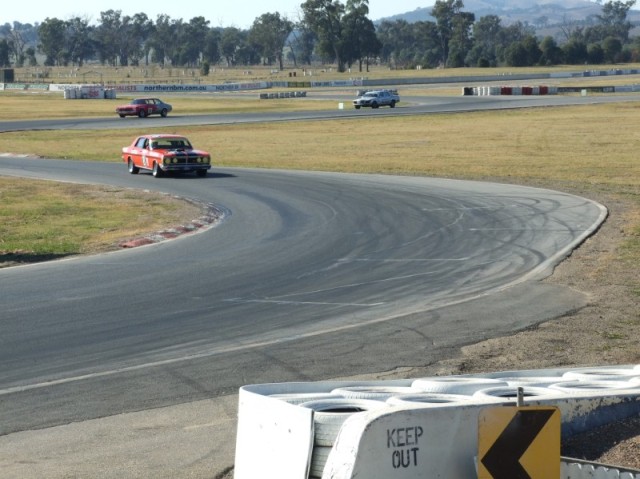 Pedal to the metal after the esses onto the front straight: 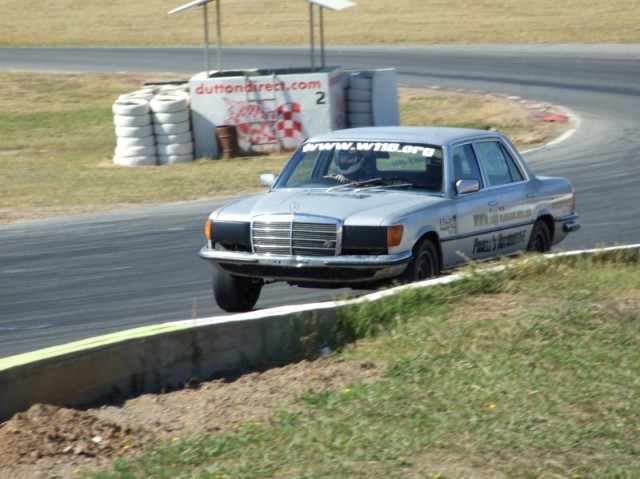 Looks like you guys had an awesome day! What was your best lap time Cam? I love those cold air ducts under the headlights... hardcore brutha! Did the A032R's make much of a difference? The topklasse stickers must have been good for at least -0.5 second each lap... they are trick! Thanks for flying the flag Cam!

Did you have a spin Ian?

Is that a Corolla in front of the Mini?

Two wheels are better than none!
OP
B

In general with Winton, a rookie in a stanard-class we consider any time under 2 minutes to be a good effort. I have no doubt that in the 3rd heat Cam run in he might have got a smidge under 2:00 and I might have even made it to high 1:46s as the RX4 was running really well...

Some notes for the day:

The A032Rs did a sterling job but their wear rate was incredible, you could see the difference, mm by mm lower, in between heats. But they did hang in there, even when one of the rear tyres was starting to shread (developed a flat spot and then a hole in the outer layer rubber) Cam was still able to complete the 3rd heat with them. Trivia: did you notice in the picture of the W116 next to the mini they both have the same A032Rs? Mini has tiny 165/50-10s, while Cam's has giant 225/60-15s.

We ran out of words to describe how lousey the 3.07 single spinner diff was. Most of the rear tyre wear was probably due to wheelspin coming out of corners from the massive 368nM M117 torques.

After the 1st heat when Cam returned off the track the front brakes were smoking! The ATE pads used were rated at 550C and I reckon it was probably running at the limits of their design. As a buffer zone Cam will look into fitting a race-style pad material rated 750C or more. With all credit to ATE, they did not fade noticably, they just got bloody hot and smoked... and smelled.

For the 1st time since Cam has owned the car the engine got hot enough for it to switch on the aux fan, at an indicated 110C on the temp gauge.

I didn't run in the car but am all enthused to get my 450SE track ready...

The car in front of the mini on the starting grid is a Camry... laugh it up but the driver is very talented and with a few ECU and tyre and brake mods its seriously much faster than a Camry should be... mid 1:40s ....

The check list for cam before the next Sprint is long:

Check brake discs for cracks
Fix leaking master cyl O-ring
Change brake pads for Race pads
Procure more A032Rs
Lower the car about a foot
Fit an LSD with a more useful ratio than 3.07:1
Install Pleather of death
Needs more of an exhaust note, so maybe a sidepipe exiting under the rear door

Sometime soon there should be some youtube clips uploaded, including one with Cam being interviewed before the 3rd heat.

Everytime I read your stories on the track, that little voice in me comes back saying "go on... get back into it..."

Keep it up guys.
I am (we are) proud of you
Michel

The stickers definately got me -5.0secs a lap!!

The day was best fun i've almost ever had!!

Ian had a couple really good stints in the RX4.. The standout was against an SS commonwhore (VX i think) that had Gen 3, 6.0L v8. 6 Speed auto. And Mav's was trailing him and getting closer the whole sprint. I'll get some vids up of that later..

My checklist before the next event, is quite long - but will definately be completed.
The car held up extremely well, and as Mav's said. It's the first time i've ever heard that AUX fan come on.. So good to know it's doing it's job.

Before next event there will be:

I won't be competing at any events for at least 3-4months so i can get all this done.

Just wanna say a big thanks to Ian, he's extremely experienced with all this, and it's a MASSIVE help!!!

I'll be posting vids / pics of the day in the coming weeks.. technical difficulties..

What 380SE with a 5Litre engine?
Michel

Thanks for the link.

Plus, where is my allegiance to the Forum?

And then it would have to be seriously boosted mechanically
Michel

it would have to be with something a little more competitive than a W126 380 with a 500 engine
Click to expand...

Was wondering how long before you uttered that one... LOL

Designed to keep you firmly in my rear vision mirrors...

Michel said:
Thanks for the link.

And then it would have to be seriously boosted mechanically
Click to expand...


Gotta start somewhere mate, how bout the 690SEL you'd be really competitive then. People would run off the road cause of the blinding RED!
If everybody is thinking alike, then somebody isn't thinking - General Patton


Gotta start somewhere mate, how bout the 690SEL you'd be really competitive then. People would run off the road cause of the blinding RED!
Click to expand...

The 690SEL would be very competitive and would handle beautifully.....

Couple of videos from the day.

Cameron in the 450SEL

Me in the Mazda RX4

SELfor50, B13, you mentioned fitting an LSD,

have you given it much thought as to what you would fit?

I'd imagine for that short track you would need a taller diff, 4:11?
How fast can you get up to on that track, or I guess the more appropiate question is what is the longest stretch of straight track?


interesting to see the progress,

SELfor50; have you given much thought to shedding some weight off the car?
OP
B

My (yet to be fitted) LSD has been procured from a 350SL which didn't need it anymore... ratio is 3.46:1 and as best as I can tell it will fit with minimal (if any) modifications...

If we work on a max engine speed of 6500 rpm, if we go much lower than that we're likely to run out of legs on the longer grand-prix type circuits like Sandown and Philip Island.

The 280 diff would be great for a short curcuit like sutton on winton if there was any way to get all that power and torques to the ground...

Cam and I are both going to try the 350SL diff in our respective cars and make notes from there. The RX4 runs a locker (welded) but doesn't have a lot of weight over the rear of the car so basically lives and works OK under that car , as Cam can testify.

Ian's setup in the RX4 definately looks / sounds / IS the goods!

I'm extremely confident the 350SLC diff will be a good compromise between acceleration and 'legs' for the 3 speed. The LSD is a must for the track... can't wait to get it in.

As for weight reduction, it's already begun. Along with stripping the interior, all the electric window motors / sunroof motor (possibly sunroof too, replacing with perspex if regulations permit), all air con / heating equipment, plumbing etc..
Easiest way to say it is - it'll only be a bucket seat, the motor and what's needed to get it round the track will remain in the car. Anything and everything not needed will be gutted...takes time though.

Cam.
If everybody is thinking alike, then somebody isn't thinking - General Patton

My preference is for "full spool" diff centre - basically a locked diff with no differential ability at any speed. Trouble is they are hard to find for Mazdas and impossible to find for MBs. As an alternative we weld up the diff centre of a Mazda diff (called a CIG locker) so make a locked diff. There's no reason this couldn't be employed in a MB diff.

Low speed drivability becomes terrible, as Cam saw on the weekend manouvering the RX4 in tight places required decent prods on the accelerator to brake traction on whichever wheel is on the inside.

On the plus side thru the sweeper and esses I can keep the boot in thru left and right transitions without any worry that the inside wheel will start spinning. I think its fair to say that Cam had to work much harder than I did at these parts of the track as at various times I could hear the torque getting the better of the 450SEL and lighting up whichever rear wheel was on the inside.

I agree, a locker would be ideal!!

I don't have any level of confidence that I wouldn't be snapping axle's though.
With the weight of the ol' girl - I reckon it would be 1-2 events before the shalfts would be used toothpicks.

I'm guessing upgraded / lowered / firmed suspension would put a lot less strain on the shafts / axles of a locker though, yeah??
If everybody is thinking alike, then somebody isn't thinking - General Patton

My best 3 runs were during my 3rd run of the day.. I know I could've squeezed an extra second or 2 out of the track had I gone for another 2 sprints...though I wanted the ol' girl to get me back to Canberra..
Being the only 'Mercedes' on the list, and also topping a few purpose built track cars (The mini, HQ, Capri etc) i'm pretty stoked!

It's only up from here!

Cam2.
If everybody is thinking alike, then somebody isn't thinking - General Patton

Keep it up
Michel