I am one of those fellows that likes to do things better than what one really has the time for. In this instance, the picture reveals a somewhat unfortunate mixture of the original taxi white, accumulated dirt that you don't ever see unless you start dismantling bodyparts and things just look, well, messy. 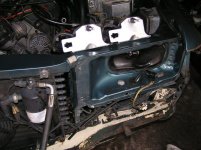 So out comes some spare MB877 Petrol and a paint brush to give us this..... 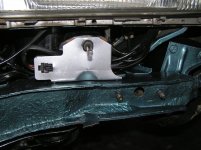 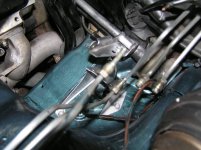 Of course, the front bar and the two covering panels for the electric washer motors for the wipers have been removed for repainting and refurbishment.

That definitely looks nicer with that fresh coat of blue
Michel

Thanks Michel - it does look better. I have also, or hopefully did have, a couple of persistent oil leaks - one from the engine, and another from the gearbox. I had already fitted new rocker cover gaskets some while back and quite frankly I got the 'kaputts' when the leak persisted. So this time I decided to reseal (again) the rocker covers and I discovered that one stud had not been sitting properly (down far enough) for the retaining nut to be tightened down properly. That has now been rectified by the use of an Allen headed bolt and copper sealing washers on all studs. Hopefully, that will eliminate the oil leak from the engine.

As far as the box is concerned, some while ago I changed the filter and rubber seal, but a persistent oil leak seemed to emanate from the two pan retaining bolts from the rear of the box. I have now removed and refitted those with a slight smear of silastic sealant. Hopefully again, this will get rid of the oil leak from that area. Whilst at it, I decided to change the engine oil, and I am surprised that there is still a slight amount of sludge in the recess of the bolt that seals the bottom of the oil tank - this is despite the fact that I have regularly changed the oil since carrying out the valve grind and decoke some two years ago - yes two years. This just seems to re-affirm the amount of sludge that must have been internally in the engine prior to head removal. Regards Styria.
You must log in or register to reply here.
Similar threads