A have been rebuilding a 3 litre rover engine out of a p5 Mk2c coupe. It is not my car but it belongs to a customer. 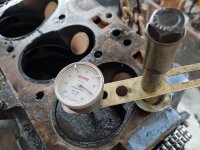 George, the owner of the car has been a personal friend for many years, and he actually asked me would I consider to become involved in the rebuilding of this engine, a Mark2C which is similar to the Mark III as featured by revised Crankshaft main bearings. In this picture illustrated, I "cobbled up" a fitting with a Dial Gauge attached to determine No. 1 TDC. As designed by the Rover Company, the crankshaft pulley has no timing markings, and obviously there is no pointer that is attached to the front of the engine. The timing marks are in fact on the flywheel that is attached to the front of the Torque Converter, and NOT attached to the rear of the engine or drive plate as is practiced by other manufacturers. In fact, the next model, the Mark III, does have timing markings on the front crankshaft pulley with a pointer attached to the timing chain cover. On instructions from myself, the mechanics when they removed the engine from the car, the gearbox was to be left attached to the converter which, in turn, is fitted to the front pump of the gearbox. This meant that I had absolutely no way of accurately obtaining TDC during the dismantling process, and I needed to make sure, as best as possible, to set the crank to TDC to determine if the engine had been re-assembled correctly when previously rebuilt. Nothing like copying old mistakes.

Observing the "cobbled up" arrangement as illustrated, there is no way that I can be certain that the assembly is right on TDC - even the thickness of the carbon evident on top of the piston is likely to influence the reading and measurement of the piston travel.
Last edited: Jun 28, 2021
OP 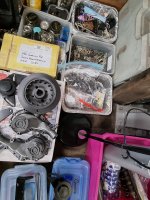 Just some components cleaned up, such as a modified water pump with increased in number Impeller Blades etc. 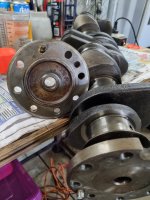 The mystery part (flange) required when changing from Auto to a Manual transmission set-up. I much prefer the four speed with overdrive gearbox gearbox to an Automatic unit. Better acceleration, more restful on the Open Road when cruising (WITHOUT EFFORT) at eighty miles an hour and achieving twenty five miles per gallon on a run. It'll do me. 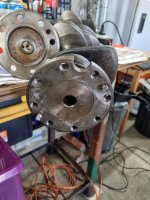 The conversion plate (on the left) is attached to the back of the Crankshaft flange, requiring slightly longer bolts and one less locating dowel. 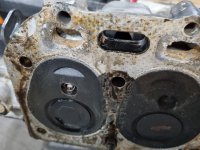 Quite frankly, for a low mileage engine, he head was in quite pitiful condition. I supplied George with a much better unit at no cost - in the end ! Hmmm...... 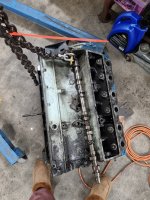 <That's the camshaft - signs of slight discolouring indicate camshaft wear. Ignore my slippers - they are not part of the deal. I forgot to put on my work shoes. Just have a look how clean they are - tidy bug ! Also, as can be seen, the internals were surprisingly full of sludge. According to the owner, he did change the "frequently", but I would probably beg to differ. Anyway, the complete block will have to be hot bath pressure cleaned. 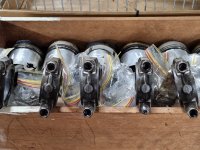 Pistons looked fair. The Engineering Shop will have to measure bores so that the appropriate size/over can be purchased from the UK. In my view, purchase of pistons can be a lottery. JPS Pistons in Adelaide can supply newly machined pistons, at purportedly the correct compression ratio. With the Rover 6 in line F-Head engines (don't know why they call them that), the combustion chambers is in piston cut-out and a chamber in the engine block. The exhaust valves are located in the cast iron block. Pistons come in 8.75, 8.00 and 7.8:1 compression ratios - in other words, on a low compression engine such as 7.8:1, more metal would be scalped out from the piston crown., but that ratio would render the performance a slug. Also, with JPS pistons, one can never be sure if they are weighted more heavily, thereby restricting ability for the engine to rev, which again would slow down performance. As I said, this can be a real lottery. 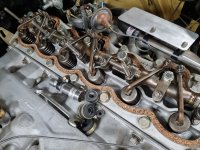 Head, Inlet Valve gear and Inlet Manifold of my Mark III that I am restoring and building up. 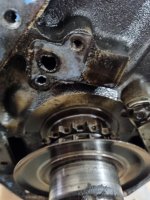 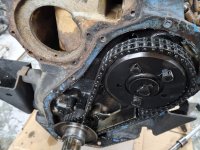 What I found was that the Timing Chain Tensioner did not keep the chain super tight as it is supposed to be. I just wonder if, perhaps, the timing was one tooth out, which may (or would it) explain why performance of George's engine was abysmal. It went faster backward yet George reckoned that the engine was performing well. 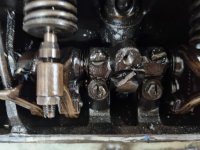 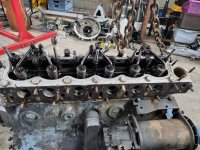 Head and Inlet Manifold in surprisingly poor condition. Just have a look at those rusted studs - they were all removed prior to bead blasting. 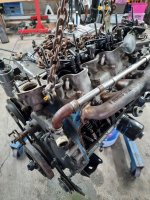 Layout of engine - for all it's worth, note exhaust valves in the side of the block. 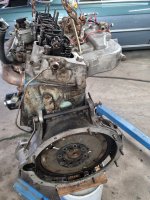 Those markings, made by the mechanics that pulled out engine and separated from the Flywheel and Gearbox, are going to be extremely important when assembling engine CORRECTLY. The Flywheel cover can be seen quite clearly, absolutely chock a block with sludge and oil caled on by heat. Please note on the top right hand side - that's the inspection cover which, when removed, shows the markings for TDC and also the 106 degree No. 1 EXHAUST PEAK. It can only be determined by means of a dial gauge, but needs to be spot on to get the valve timing set properly. 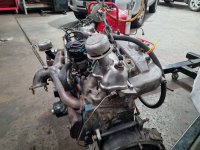 Considering the english taxation laws favored long stroke engines (tax on bore size), the IOE layout was a clever way of getting bigger valves in the engine. Ended up a quite efficient design for what it was. 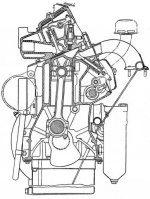 For those of you who read this thread when first posted, it has now been significantly updated with more text next to the pictures so you might want to go back and have another look.
Bryce
https://www.classicjalopy.com
OP

All components have been removed from the first Engineering Shop at Blacktown. Their service was abysmal - I needed information as to standard/oversize pistons and bores, and they could not even tell me as to when they would be able to spare one hour maximum to carry out the measurements......"we'd have to take a man from another job that's been waiting for a long time". I presumed that applied to all of their work on hand and in the end I removed all components after they had been sitting around for six weeks untouched - despite any number of calls and pleas for action.

Another Engineering Shop has now taken on the job and whilst providing somewhat better service, there are still some issues with returning calls, precise information etc., but I have struck the jackpot in the shape of an unexpected phone call from one of their Engineering Subcontractors. In fact, it turns out that this Subbie is in fact doing most of the work - and NOT the Engineering Shop. The guy, by the name of Graham, inadvertently phoned me in relation to a Volkswagen engine. I was about to say "sorry buddy, know nothing about it" but "hey I said to myself", why is he ringing me of all people ? I was quick enough to suspect "something" and I was just in time to ask him whether he knew anything about a Rover engine. The answer-Yes, from my Engineering Shop ? Yes ! I struck Gold, because Graham used to work for an Engineering Shop located in Wentworth Avenue in the City - New Process Cylinder Boring and I used to take work to them back in the '70s - he was apprenticed to them at the time. Wow, we had something in common straight away, and what a good feeling it is that one can actually talk about jobs and gain some Insider knowledge. More to come. Regards Styria

Looking forward to see what happens next.

Good you've found somebody to take this on who knows what they are doing.
Its a real issue with all the knowledge that is being lost as people retire.
Bryce
https://www.classicjalopy.com
OP

The benefit of accidentally finding Graham has put a different perspective to the rebuilding of George's 3 litre Rover engine. With Graham doing all the measuring and most of the Engineering work, he has already assured me that the engine block, apart from sludge, is in really good condition ('20thou over), the pistons are fine but he will expand them and obviously new rings will have to be procured. Graham will also hone the bores, he has measured the crankshaft which is in beautiful standard condition apart from one of the Big End journals and it's been decided to grind those '010thou over and basically stay with the existing engine as it is. The Shop itself will skim the engine block surface, exhaust valve seats in the block are perfect, and George has provided me with brand new exhaust valves. The head will just have a light skim, and again the Shop will cut the Inlet Valve seats for a perfect valve fit - Inlet ones will be re-used.

In my view incorrect valve timing has been responsible for extremely poor engine performance and quite horrific fuel consumption. I'd go one step further and suggest that incorrect valve timing can be responsible for the sludging up of the engine, but one should consider that this engine had previously been rebuilt about twenty five years ago. In order for me to ascertain the correct valve timing, I have purchased a dial gauge kit that should enable me to determine the precise exhaust valve peak on No. 1, with the crank set at109 degrees, and the timing gear and chain set up correctly. It will be an interesting challenge. Regards Styria
You must log in or register to reply here.
Similar threads