More threads by B13

Just a quick yes or no question, I'm putting a new sump and gasket on my 450SE, the gasket looks thick and rubbery - do I need to put a bead of sealant around the mating surfaces like other manufacturers do or just put it in with clean mating surfaces?

Hi Ian, you may get away with not using a sealant, but for peace of mind I would apply a very light smear of THREE BOND gasket sealer or the brown guey Permatex brand. The last named remains more flexible.

Tell me, did you find anything out of the ordinary after you removed the sump. I take it that you resorted to removal chasing better oil pressure. I'd be very interested in how you get on, and also did you experience any particular difficulty in removing the sump. Regards Styria
OP
B

Yes! Its quite an interesting story... and god these are resilient engines...

First we started out with crappy low Oel Pressure:

Then after a number of oil changes, oil flush treatments, and a couple of oil filters, we got it up within spec (1.0bar oel pressure hot and 3.0bar+ oel pressure at 3000rpm):

Also by using oil designed for high milage engines the valve stem seal smoke has pretty much gone away and so has the plug fouling. We've had a few good test runs in it now and its running nice and strong in the 100-140km/hr speed range.

As a part of any race car I built its manadatory for me to have an oil temp guage, so I bought a good used sump from a wrecked 350SE and installed the temp sensor into that. Yesterday I removed the old sump from my car and it was amazing the accumulated junk in it: 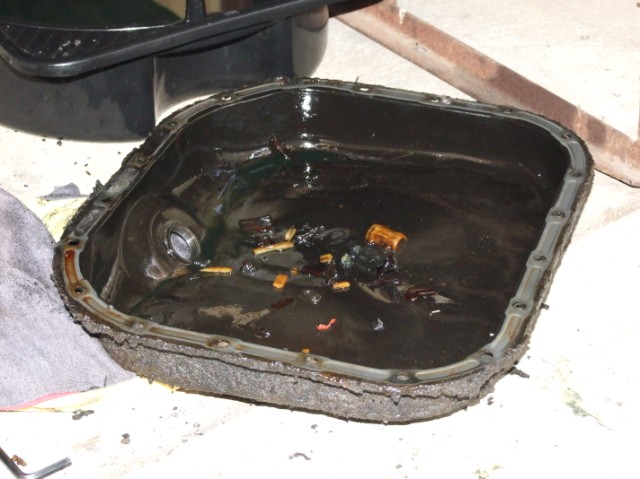 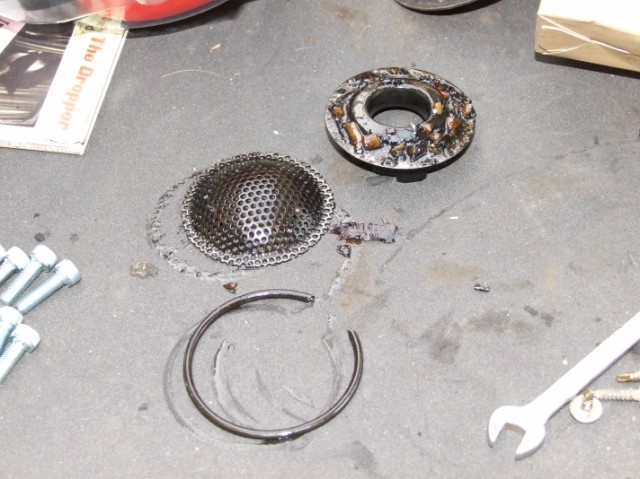 It would appear that sometime in its life its had a plastic chain tensioner go brittle and break up, and they've changed the chain at some time (there's some chain debris in the sump as well). Whoever changed the rails and chain neglected to remove the sump and clean it out. The gause was clogged with pieces of broken chain tensioner and the rubber doodad on the bottom of the oil pickup was also buggered... so I can't fit my new sump until I replace that on Monday.

I didn't remove the oil pump after all that as I've decided the clogged pickup is the cause of the problem, and now thats fixed I'm expecting oel pressure as good or better than that in the 2nd video.

You never know what you'll find when you look in the belly of a 'Great White'!

Very glad to hear that you've found the cause and fixed it(rubber doodad pending).... another thing ticked off the list for the track prep.
If everybody is thinking alike, then somebody isn't thinking - General Patton

Hi B13, I am so glad for you that the work carried out is showing some reward for your efforts. Just the thought of putting on a clean sump, with fresh oil, must give you considerable satisfaction and peace of mind. Well done, mate. Regards Styria

Is your engine Euro spec with 8.8:1 compression and separate oil cooler or an aussie one with radiator only?

Is your engine Euro spec with 8.8:1 compression and separate oil cooler or an aussie one with radiator only?
Click to expand...

Its an Aus Delivery 1975 450SE, which by rights should have 1 large radiator, bit instead has the Euro-style radiator and oil cooler.

Compression ratio? Could be anything but the engine is pre-ADR D-jet (as you would expect) no air pump or anything... Do Aus M117.983 have a lower CR than Euro ones (like the 6.9), as I was lead to believe the Aus M117 pre-pollution engines were all the same 8.8:1 CR.

Thanks for your continued support for the project, godfather.

According to the workshop manual -

Hi Ossie, your 350SE has an oil cooler situated next to the radiator on the right side - is that correct ? BTW, I seem to recall that not so long ago you were going to take the "white flash" to your mechanic to get some work done that you did not want to do yourself. Did you go on with those plans and, if so, how did it turn out ? Regards Styria

Styria said:
Hi Ossie, your 350SE has an oil cooler situated next to the radiator on the right side - is that correct ?
Click to expand...

Nah I got the wide radiator, no cooler, just transmission cooler below. The 280S has a side oil cooler but not my k-jet 280. I can't remember the CR's of those but what determines the need for an oil cooler then? - is it CR, engine size?